How well do you know your diamond shapes? And, most importantly, which shape is your favourite?
Take a look at the chart below and decide which shape and cut you love the most.

Diamond shapes are so evocative of different styles, so depending on your personality there’ll be one diamond that you are instantly drawn to! For one very lucky customer, Christopher Wharton himself, sourced the beautiful pear diamond shown in the picture above.

Did you know that at Wharton Goldsmith we have a stunning collection of loose diamonds? You can choose a loose stone and have a piece of jewellery crafted around the diamond. Designed and made especially for you or a loved one, a one off piece for a once in a lifetime opportunity. Pop in store or give us a call to enquire further- 01727 859489.

To help you on your way, here are some of the most popular cuts, which is your favourite? 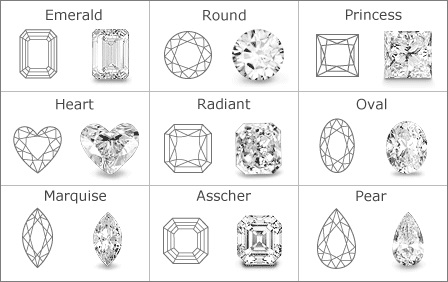 Keen to learn more? Then take a look below at each cut and many more in more detail.

Round: It is a popular option for diamond wedding rings because it makes the gemstone sparkle intensely.
FACT: The round brilliant is usually the most expensive cut option because jewellers discard many diamond particles when creating this cut from its rough form.

Princess: While the round brilliant is one of the most popular diamond cut today, the princess cut is a close second, especially for diamond rings.
FACT: Princess cuts are square shaped and have the appearance of an “X” in the center.

Oval: The oval cut is an elongated version of the round brilliant. Lazare Kaplan created this shape in the early 1960s. It usually appears larger than other cuts even if it is the same carat weight.
FACT: To determine badly cut ovals, look for uneven sides.

Marquise: The marquise is a long cut that has points on both ends. It typically rests vertically in ring settings, but horizontal settings are becoming more popular.
POSSIBLE FACT (!): The shape is said to have been based on a woman’s lips, which is especially noticeable when the stone is set horizontally.

Emerald: The emerald is a rectangular cut. The facets on the emerald are step cuts instead of brilliant cuts. Step cuts are flat planes that look like the steps of a stair.
FACT: Emerald-cut diamonds do not typically reflect as much light as some other diamond cuts.

Heart: The heart symbol long been used to send the message of love.
FACT: A well-cut heart should have two equal sides and should be slightly rounded.

Asscher: This cut is named after the Asscher Brothers, who developed the shape in Amsterdam in 1902. Asscher-cut diamonds are like emerald-cut diamonds, except they are squares instead of rectangles.
FACT: This style was popular in the 1920s.

Radiant: These square or rectangular diamonds have a brilliant cut with 70 facets and rounded corners. With radiant-cut diamonds, you get the shape of an emerald-cut diamond plus the sparkle of a round-cut diamond.
FACT: This is a popular cut for colored diamonds because it can intensify the color.

Trillion: These diamonds are cut in the shape of a triangle. The three equal sides can be straight or curved. This cut is usually used for accent stones on rings, but it is occasionally used for center stones.
FACT: The Trilliant, was once a trademarked cut developed by the Henry Meyer Diamond Company.

Choose from our loose stone collection and have a piece of jewellery crafted around the diamond.
Pop in store or give us a call to enquire further 01727 859489.

This error message is only visible to WordPress admins

Please go to the Instagram Feed settings page to create a feed.


Warning: Trying to access array offset on value of type bool in /export/www.whartongoldsmith.com/html/blog/wp-content/themes/pipdig-venture/inc/chunks/slicknav.php on line 3

Warning: Trying to access array offset on value of type bool in /export/www.whartongoldsmith.com/html/blog/wp-content/themes/pipdig-venture/inc/chunks/slicknav.php on line 4

Warning: Trying to access array offset on value of type bool in /export/www.whartongoldsmith.com/html/blog/wp-content/themes/pipdig-venture/inc/chunks/slicknav.php on line 5

Warning: Trying to access array offset on value of type bool in /export/www.whartongoldsmith.com/html/blog/wp-content/themes/pipdig-venture/inc/chunks/slicknav.php on line 6

Warning: Trying to access array offset on value of type bool in /export/www.whartongoldsmith.com/html/blog/wp-content/themes/pipdig-venture/inc/chunks/slicknav.php on line 7

Warning: Trying to access array offset on value of type bool in /export/www.whartongoldsmith.com/html/blog/wp-content/themes/pipdig-venture/inc/chunks/slicknav.php on line 8